Too Much Interest Or Completely Wrong Amount 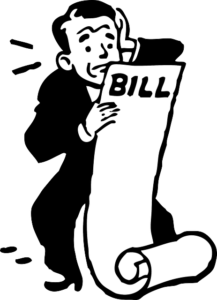 The wrong amount being collected is one of the most common issues that we come across. It is either the debtor forgot or the collection agency added a touch too much interest and fees.  Either way you want to be sure before you start paying a single penny towards hundreds or even thousands of dollars. The second you start paying, you are acknowledging that you agree with everything they say including potentially wrong amounts.

Because of the high possibility for a mistake, you should always send them a debt validation letter. This is supposed to give you some sort of idea of how they came to the amount they are trying to collect from you. The following breakdown is what is going on if they are normal and on the up and up.

$1200 – Charged Off Amount (sometimes referred to as principal)

To reiterate, the above is just an off the top of my head example. Results may vary, therefore request a debt validation and do your math carefully. The best reasonable way to do the math is to start with the charged off amount (as long as it isn’t bonkers higher than the original debt). If you do no not know how to figure this out then ask someone who does. If things look really nutty like a $1000 debt is now $10000 and it has only been a year, then you need to contact a lawyer.

For a quick and simple answer you can always email me.